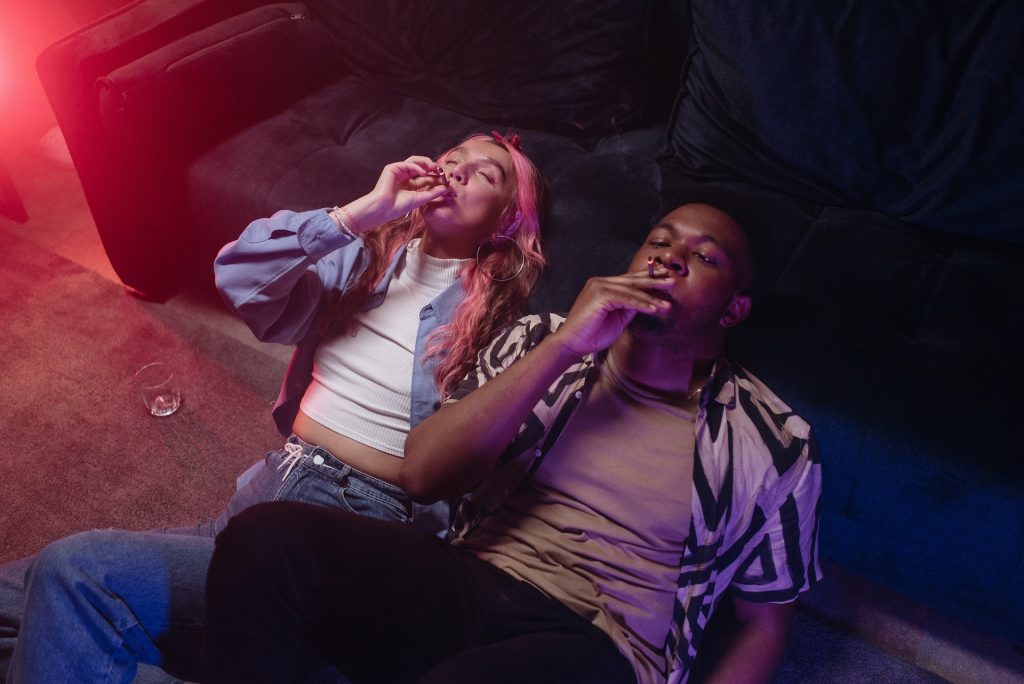 There really is something special about getting super stoned, throwing on a movie, and just getting lost in the screen. The toughest part is usually picking a movie, so today Tough Mama is helping out with some of the best movies to watch high.

So, grab a Tough Mama pre-roll or vape cartridge, dim the lights, and get ready to hit play.

A movie about a video game developer who has to move in with his grandma, Grandma’s Boy has solidified itself as a stoner cult classic. With no shortage of super stoned moments, Grandma’s Boy has some instantly recognizable scenes, including one where the main character and his weed dealer smoke a mega joint and play video games with a chimpanzee (or at least they think they are playing, the TV isn’t even on). We don’t know any chimpanzees with joints you can smoke with, but we do happen to know a gorilla that sells strong-ass pre-rolls.

America’s favorite jackasses have returned to give us more of the stunts, skits, and pranks we all love. We recommend watching any of the Jackass movies while stoned, but Jackass Forever gets the feature because it’s new, and also because Rachel Wolfson shows what it means to be a certified Tough Mama (she lets a freaking scorpion sting her in the face…multiple times).

The first of many stoner buddy films on this list, Harold and Kumar Go to White Castle is about, well, Harold and Kumar going to White Castle (a burger joint, for those unfamiliar). The premise is pretty simple, two buds get super high and need to cure their munchies, but their trip quickly turns into a gnarly adventure with Neil Patrick Harris (played by Neil Patrick Harris).

Super Troopers is about Vermont state troopers that straight up have nothing to do other than goof around and prank people, basically. The movie is full of dumb pranks, police rivalries, marijuana smugglers, and hilarious jokes. These troopers are a guaranteed good time, just don’t let them catch you littering and smoking the reefer.

While we can’t help you with the littering part (it’s pretty easy, just don’t litter), we can recommend Tough Mama’s YOLO SHOTZ if you’re looking for a serious high without the smoke. Just be careful, taking the whole thing at once might leave you feeling like a Vermont state trooper tricked you into eating a whole bag of weed. Oh, and also don’t consume and drive!

A movie that’s more than just “alright, alright, alright,” Dazed and Confused is about small-town Texas teenagers trying to find fun in the 1970s. If you’re looking for a movie to watch next time you get stoned, there’s a “fiesta in the making” by clicking play on this classic.

Probably the most notable modern stoner film, Pineapple Express is so good they literally named a cannabis strain after it! (Seriously, it didn’t exist before the movie). Another stoner buddy movie, Pineapple Express is about a man and his drug dealer fighting for their lives after getting wrapped up in some serious business, all while constantly baked.

The Dude is iconic, and the Dude abides. The Big Lebowski is a movie about a man that loves bowling, white Russians, and his rug that tied the room together. Kidnapping, ransoms, and a crazy friend all try to harsh his mellow, but somehow the Dude always takes it easy with what we’d guess is some really good weed.

Taking place on one crazy Friday, this movie stars Ice Cube and Chris Tucker, who have to quickly scrounge together some money after smoking $200 worth of their dealer’s weed. Next time some weed knocks you the fuck out, pop on Friday and enjoy the show. We also suggest skipping the dealer and just going straight to Tough Mama for the hook-up.

Everything Everywhere All at Once (2022)

Everything Everywhere All at Once is a movie that can’t adequately be described in words. It’s funny, emotional, full of action, and downright trippy. It explores the concept of a multiverse, including a universe where people have hotdogs for fingers. The movie is fantastic, but experiencing it while high will send you to a different universe…or possibly dozens of universes. Just don’t stare into the bagel!

Ever smoked possessed weed that lets you see a ghost who helps you cheat on tests and get into Harvard? Yeah, neither have we, but if that sounds interesting, then How High is the movie for you to watch the next time you’re stoned. It even features Ben Franklin’s “liberty bong,” which is pretty much just a huge cannon-bong hybrid, and we’re here for it.

Cheech and Chong are the OG stoner buddies, so a list of stoner movies has to include the iconic duo. Up in Smoke is their first movie and the grandfather to all subsequent weed comedies. Just two men who love to smoke, getting into a series of shenanigans. This one is an oldie but goodie, and a great option for your next high movie viewing party.

Tony Hawk: Until the Wheels Fall Off

Bonus recommendation for Tony Hawk’s new documentary on HBO. This documentary provides a look into skateboarding’s biggest icon, Tony Hawk, including a window into all the ramps, tricks, and slams that turned Hawk into a legend. It might not feature weed like most of the other recommendations on here, but damn if it isn’t fascinating to watch sober or stoned!

Let us know how you enjoy the movies, and feel free to throw in some of your favorite suggestions. And remember, Tough Mama’s got your back when it’s movie time and you’re looking to get properly baked.