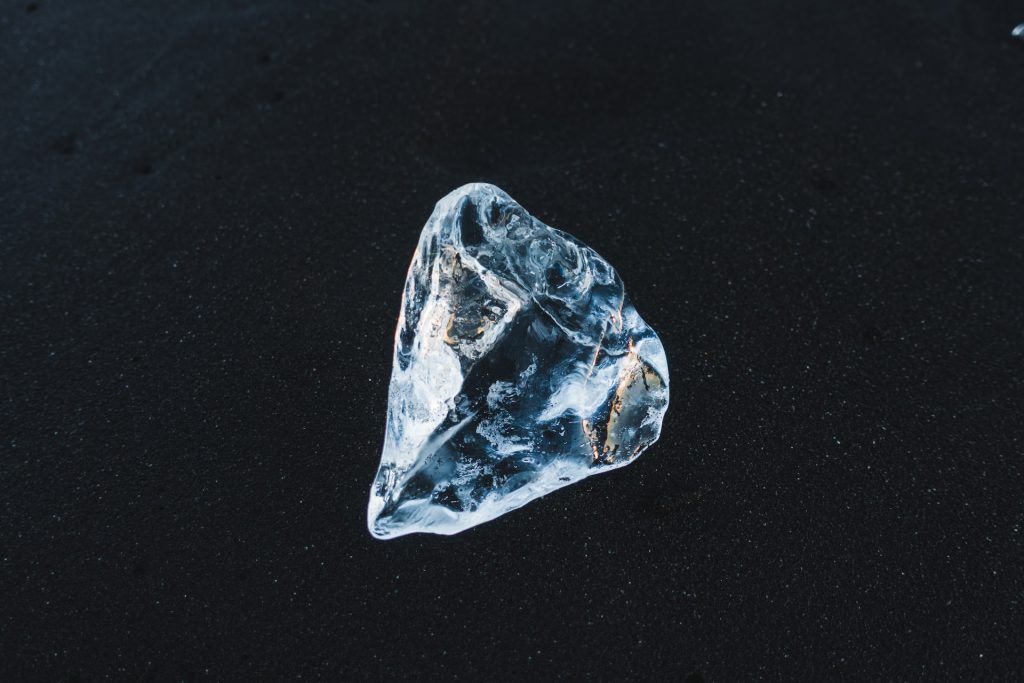 Let’s get the disappointing news out of the way first: no, weed diamonds are not the object of a super cool ganja heist that involves giant bags of flower and sick criminal code names like “Green Wolf” and “Lazer Chronic.”

Basically, THC diamonds are a form of isolate that’s crystallized, so it looks like those healing crystals your ex bought in Silverlake for $200. Except weed diamonds might actually make you feel something, and you don’t need to recharge them in the sun or whatever.

What Are Weed Diamonds?

OK, first things first: isolate. So, after cannabinoids like THC (the chemical compound that gets you high) and CBD (cannabinoids that offer similar benefits to THC, but aren’t psychoactive) are separated from the flower by way of distillation, they can be further refined into a mega-concentrated isolate.

Usually, isolates take the form of small crystals or powder that contains virtually pure cannabinoids. While this has the potential to make isolates really potent, they’re usually tasteless and odorless because the terps and other plant components have been removed during processing. And when you lose powerful components like terps and other volatile organic compounds, you run the risk of changing the character of the cannabis, from how it tastes to how it makes you feel.

You’ve probably figured out by now that THC diamonds are a type of isolate. (I mean, we just spelled it out for you, so if you’re still confused, go back and read the section above.)

Weed diamonds start with the cannabis extract called sauce (or terp sauce), which is made when a liquid solvent — typically butane or another harsh (and possibly even harmful) chemical — separates active cannabis compounds. While solvent is usually removed as quickly as possible during extraction, in this case, it’s very slowly removed and a bit is typically left behind. While the technique saturates the sauce with THCA (more on that later), leaving behind any trace of a chemical like butane (a.k.a. actual f**king lighter fluid) isn’t great.

Within the sauce, shiny crystalline solids of THCA are formed and eventually separated out — that’s where you get the whole “weed diamond” thing. Weed diamonds can be made from any cannabinoid, which is why you’ll see CBD diamonds, too.

Weed diamonds vary in size, shape, mass, and purity based on factors during their creation, like temperature, moisture, and the type of solvent used, as well as the terps and other compounds present in the sauce. And, yeah, people do call them weed diamonds because they tend to be pricey AF — THC diamonds can run you about $60 per gram.

What’s Up with THCA Diamonds?

Look further into this stuff for two seconds, and you’ll see the term “THCA diamonds” used just as much (or maybe even more) than “THC diamonds.” So what’s the deal?

Basically, the terms are interchangeable. THCA is THC acid, a THC precursor compound that’s very abundant in cannabis plants and has the potential (keyword there) to get you very high. THCA in its normal state will technically not get you high, but when it’s heated it’s converted to good ol’ THC, which does (obvs) get you high.

Anyway, the THC diamonds that you see on dispensary shelves or in your pre-rolls are essentially always THCA, even if they’re marketed as “THC.” The more you know.

For the most part, people use THC diamonds by dabbing them. Since they’re often free of aroma and flavors, they’re usually paired with some syrupy extracted terp sauce to add taste and scents back into the equation. Bits of weed diamonds can also be added to pre-rolls or processed into vape carts.Some companies, like Jeeter for example, infuse their pre-rolls with “liquid diamonds” and other additives — though some products that boast “liquid diamonds” are actually just using some sort of distillate. Because there aren’t any real regulations on weed diamonds, one major drawback is that the people selling you them can kinda just label shit however they want.

And as we mentioned, once the THCA in the diamond is heated up, it transforms into active THC and gets you high. Because of the high concentration of the crystal, which can be about 95% to 98% straight THCA, the high can be head-smashingly potent. The flip side is that you stand to lose a big portion of all the other things that make good weed, ya know, good weed. Terpenes and other natural compounds give different types of flower different vibes in terms of both flavor and high; without those, you might get a less balanced, more harsh feeling high with an equally harsh, chemical-tainted taste.

Weed diamonds themselves can be a form of live resin, and we get why you’d be curious about them. But the thing is, you don’t have to be a millionaire to satisfy that curiosity, and you don’t have to sacrifice a rich experience to get a powerful high, either.

Wanna try the power of resin for yourself? Tough Mama’s Solventless Cured Resin-infused pre-rolls feature cured resin extracts that pack twice the terps of other pre-rolls, and are fully infused for a smooth, even burn. Each blunt hits hard with 25% to 35% THC (and at a fraction of the cost of weed diamonds), so you get that super punchy high without sacrificing the essential compounds that make your smoke both distinct and satisfyingly complex. Because who says you can’t have it all?

Sure, they’re only for the brave. But we bet you can handle ‘em.