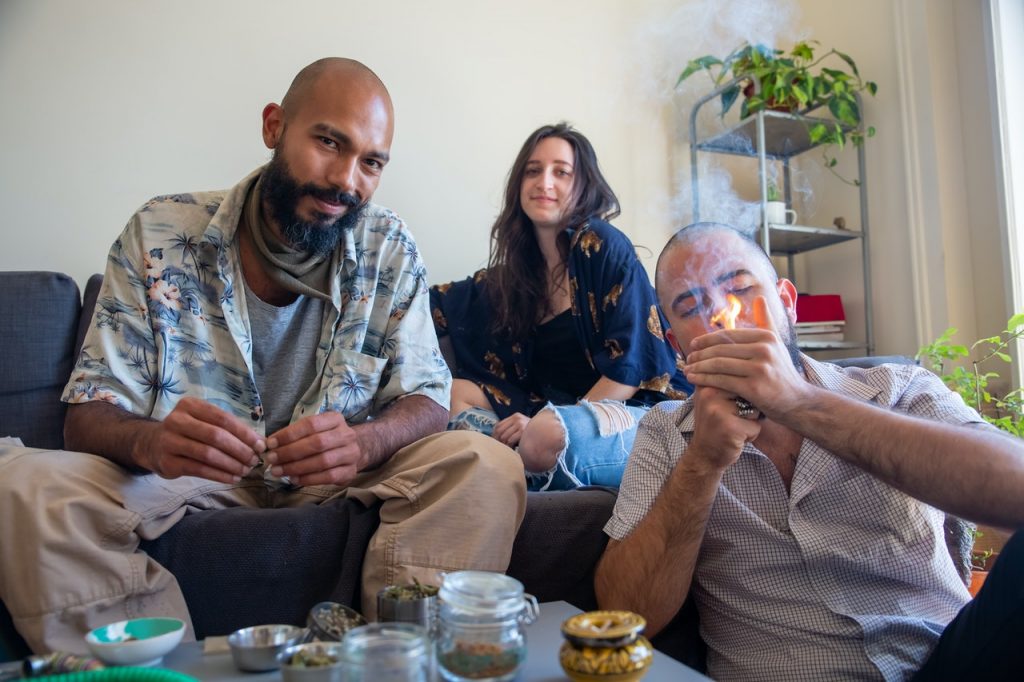 The science don’t lie – weed doesn’t just give you the munchies and make memes funnier, it can legit lower your inhibitions, and with less inhibition comes more freedom to try new things, things that might’ve been a little tough in the pre-YOLO SHOTZ world you were living in.

Look, we’re not saying that you should learn to drive a tractor or fly a hang glider when you’re higher than a giraffe’s ass, but that little push into a less guarded state of mind can definitely open you up to some new possibilities, ranging from extra dumb fun to “hey, this could actually change my life for the better.”  Need some ideas? Here are 10 Tough Mama-approved things to do while high.

Sometimes, it’s hard to learn shit when everyone’s watching. Lucky for you, the skatepark is usually a place where you’ll be in the company of stoners, and cannabis naturally has a tendency to lower stress levels and ease anxious feelings. Plus, skating is just one of the best things to do while high, period.

So try that thing you were too nervous to bust out before. If you’re just getting your Vans wet, you’re high enough to try a basic ollie or some manuals. If you’re feeling like Rodney Mullen, let go and try that laser flip, backside tailslide, or impossible. It isn’t actually impossible – trust the weed.

If you’re in LA and looking for a place to skate, you can check out Tough Mama’s favorite skateparks in the city.

Asking someone out at the grocery store without being a total creep is on, like, every single human’s bucket list, right? If it’s on yours, ease your mind with a hit of indica and start the conversation with a nice simple compliment about munchie choices before you toss in a gentle coffee invite. Or just buy them a Lunchable. You got this.

A little baby soap makes slip-n-slides extra slippy, but pile on tubs of Jell-o to add color and a big dash of “why the f**k not?” Stack up some YOLO SHOTZ at the end to make it a race to a gelatin-covered pot of gold.

Wine and paint nites are some Applebee’s type of shit, but fingerpainting? Why did we ever stop? Because we grew up? Fingerpainting rules, you know it rules, and it sucks that you grew out of it. Toke up and break out those acrylics, let’s paint this thing like it’s a prog rock album cover from 1986.

Wondering how to become a YouTuber? Get high. Yeah, there’s a lot more work to it than that, like video editing, understanding algorithms, networking, and, uh, talent, but you’ll never chase your dreams if you don’t do one thing: start. Try your own take on Zackass, powered by bud and your best buds. Start that weird TikTok recipe trend you’ve been sitting on for months. Stream some of those bonkers-ass indie games that only you have discovered – a little toke always makes the first steps that much easier.

5. Eat Too Much (Sorta) Cheese

The iconic Leaning Tower of Cheeza from Goof Troop left a mark on every kid adjacent to the ‘90s. All you need is a whole sleeve of Ritz crackers, “glue” those shits together with the edible adhesive of your choice (deli slices, more cheese?), and then cover the whole thing in Cheez Whiz till you can’t see a single cracker. Share with your friends – Pauly Shore would want you to.

Sometimes, something feeling like it’s tough is only tough because you don’t think it fits your image, but you’ve always really wanted to try it. Don’t tell me you’ve never wanted to pretend to be a lizard wizard. Dungeons & Dragons has been cool since the first season of Stranger Things, and fantasy worlds have been a thing for stoners since your dad got into Lord of the Rings and Led Zeppelin. Take the plunge, and make sure your campaign gets as weird as possible.

We’re not saying you need to confess your undying affection to anyone (though, now that we think about it, we did already suggest that you ask out a stranger) or admit to a murder or anything. But if there’s a kinda awkward little convo you’ve been wanting to have with your person, doing it when you’re both feeling preeeettttty gooooood is probably the best way to do it. Or, ya know, just tell your friends you love ‘em.

8. Stare at a Jellyfish

Here’s the tough part: you’re probably gonna have to get on the freeway. (Mama’s rules: always get high after you arrive at your destination. Don’t be stupid.) But despite its rep, weed can be good for cutting through procrastination, because it’s like your friend who just says, “f**k it, let’s go.” So go. Because, seriously, have you ever stared at a jellyfish when you’re super high? For a long-assed time? It’s like gazing into the spirit of an alien. You will transcend.

You already know sex is better high, but we’re going deeper: go to a nude beach with your crew. Let it all flop out in the wind. Remind yourselves that you’re all just human after all. It’s a real bonding experience that’s much easier if you’re a little stoned – just keep an eye out for Tough Mama while you’re there. Technically, she’s always nekkid.

OK, this one’s not really that tough. Or dumb. Or wild. But, uh, we think you should probably be more high right now and we can help.