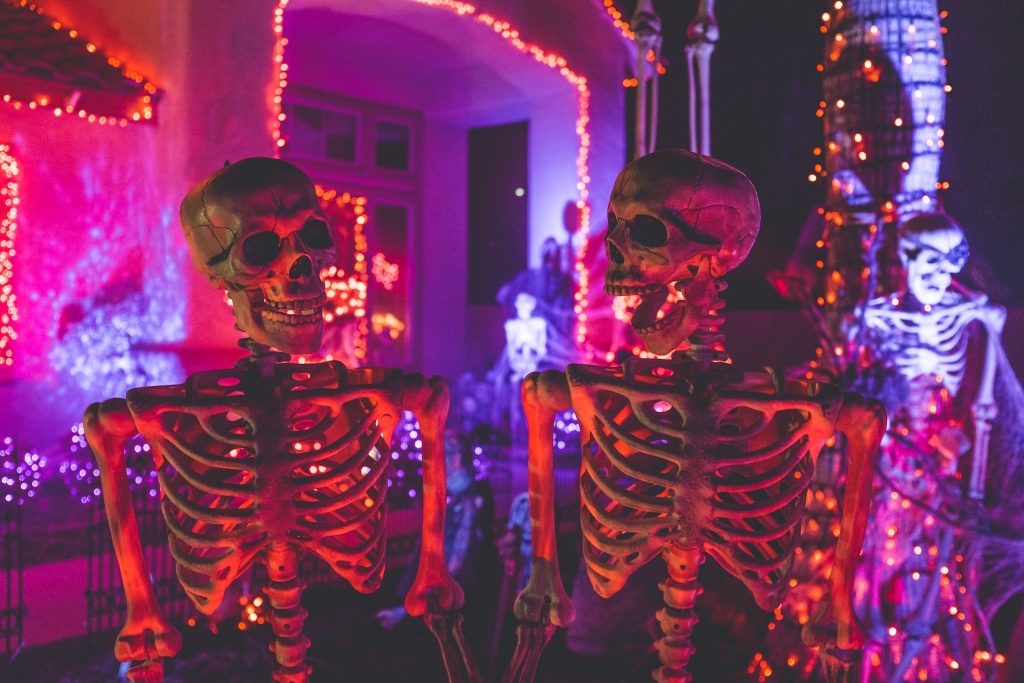 When you come to Tough Mama’s house for Halloween, you’re guaranteed all treats, no tricks. But before making it to your next Halloween costume party, you’re going to have to go through the annual struggle of picking out the perfect costume (don’t even get Mama started on finding gorilla-sized costumes). So, we wanted to help out and give the people some sweet stoner costume ideas everyone is going to love.

They say you can be anything you want if you really put your mind to it. This Halloween put your head in a pot and be…well, a pothead. And while you’re at it, might as well fully commit and have some Tough Mama pre-rolls on deck.

For the DIY showstoppers out there, becoming a human bong is a surefire way to be the life of the party. Not to mention it’ll be pretty cool to see a giant bong hitting a regular-size bong at some point during the day/night. Some bong on bong action — we’re here for it.

What’s better than a bag of weed? Yup, a GIANT bag of weed. We’d recommend filling the costume with grass trimmings or something and bringing a separate giant bag of weed for ease of access.

We had to start out with the legend herself — Tough Mama — because who wouldn’t want to be a skateboarding gorilla stocked with grade A weed?

“You wanna get high?” — Yes Towelie, we do. Just make sure you can back up the offer if you show up to a party quoting everyone’s favorite weed-smoking personified South Park towel.

The Dude (The Big Lebowski)

No stoner Halloween party is complete without an appearance from the Dude (or multiple the Dudes, probably). The Big Lebowski character is an iconic stoner figure (and the movie is a firm favorite in our list of best movies to watch while high), and if the Dude abides, so should you.

If you have jeans, a button-up, and a bagel, congrats, your next stoner costume is ready to go. Jeff Spicoli from Fast Times at Ridgemont High is a wave riding, pizza ordering, stoner legend. Just remember the lesson Mr. Hand taught Spicoli before you show up to the party — whether it’s pizza or weed, make sure you bring enough to share.

Argyle might be new to our hearts, but he’s an instant stoner icon, and a perfect source of stoner costume inspiration. Get yourself some 80’s print pants, a pizza shirt, and a visor, and you’re ready to go. Pizza and weed are optional…but highly encouraged.

If you’re looking for a more feminine stoner to dress up as for your next party, Michelle from Dazed and Confused is serving up the perfect 70’s stoner queen vibes. All you need are Some 70’s style denim pants, a purple tube top, a fringed vest, and a big colorful necklace. Bonus points if you can play some soothing tunes on a guitar.

Pick your favorite partner in crime and make your way to the party dressed as a lighter and a joint. Truly a match made in heaven. (Tough Tip: If you find yourself without a lighter in life, try out Tough Mama’s vape carts for some flame-free fun.)

If you’re looking for an easy and iconic duos costume, look no further than the legendary Cheech and Chong costume. And if you really want to nail down the details, try and recreate the facial hair…oh, and just be super high the whole time.

If “you ain’t got shit to do” other than go to a stoner costume party, Smokey and Craig might be the perfect movie character inspiration. Just try and avoid racking up debts to dangerous drug dealers. In fact, skip the drug dealer and come straight to Tough Mama.

The idea of having a bunch of state troopers roll up to your stoner Halloween party sounds like a total buzzkill. But, there’s an exception if those state troopers are actually just a group in Super Troopers costumes. Just try and turn a blind eye to anyone “smoking the reefer” (that includes yourself).

It’s no secret at this point — Mama loves memes. So, as not to upset her (and also because who doesn’t love a good meme) we’re throwing in some bonus costumes that turn you into your favorite meme.

When there’s only reggie weed at the party.

Them – “All of the kief keeps falling off the pre-roll!”

When the Tough Mama sativa pre-roll kicks in and it’s just you and the vibes.

That wraps up our best stoner costumes for your next weed-themed Halloween party. But, before we let you go, another little Tough Tip: if you don’t have the time or energy to commit to a kickass costume, just show up to the party with some Tough Mama weed, and people will be just as stoked.

Let us know if you end up trying out any of these costumes at your next party, and definitely tag us in any pictures you post of them!